“Civil legal aid is not only a moral obligation; it is a sound investment,” said Chief Justice Gants, noting the money invested in legal aid yields savings for the Commonwealth by preventing homelessness, saving medical costs, and recouping federal benefits. 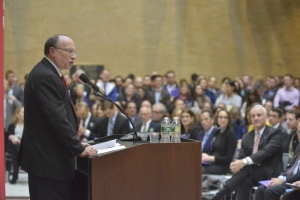 Ralph Gants, Chief Justice of the Massachusetts Supreme Judicial Court, delivers his remarks at Walk to the Hill

Fred Connelly, a teacher and construction worker from Quincy, told the story of how lawyers with Greater Boston Legal Services helped his family avoid homelessness when they were facing eviction from the home they have lived in for nearly 40 years. Injured and out of work, he couldn’t afford a lawyer to help him keep the house he built himself. Without the help of GBLS, “I know for a fact I would not have my house back today,” he said.

In his budget filed the day before the walk, Gov. Charlie Baker included level funding for civil legal aid programs in Massachusetts – an appropriation of $21 million dollars. While appreciative of the governor’s continued support, Walk to the Hill speakers stressed that more funds are needed to ensure that the civil justice system is accessible to all. Last year, two thirds of eligible applicants for legal aid were turned away. 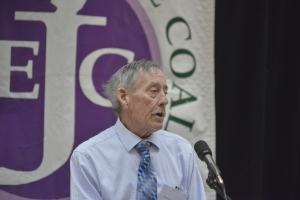 Lawyers from nearly 40 law firms and in house-legal departments and more than 30 bar associations gathered for the event, in addition to lawyers and staff from legal aid organizations, and students and faculty from New England Law, Boston University School of Law, Northeastern University School of Law, and two busloads of students from the University of Massachusetts School of Law. Chief Justice Gants urged them: “Ask your legislators if they believe that we as a Commonwealth can succeed when so many are struggling and being left behind … Discuss the families who will need legal help in the coming fiscal year because their lives have been upended by opiate addiction, by the threat of deportation, by eviction, by elder abuse, by wage theft, or by domestic violence.”

Louis Tompros, chair of the Equal Justice Coalition, invoked the Massachusetts justice system’s rich history: “It was here in the Commonwealth of Massachusetts that we developed the rule of law, it was here that we recognized its incredible power, and it was here that we recognized that equal access to the legal system—regardless of ability to pay—is a necessary condition to a free and just society … If we are serious about ‘liberty and justice for all,’ it is up to us to make it a reality.”

Lynne Parker, executive director of the Massachusetts Legal Assistance Corporation, noted that while the economy is improving for some, there is still a serious need for legal assistance: “Increases in housing costs often drive struggling tenants farther from their jobs. A job layoff, a medical emergency, the denial of hard-earned benefits, or the loss of health insurance can often be catastrophic to individuals and families who are already struggling to make ends meet. Access to civil legal aid can make all the difference.” 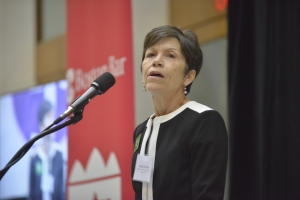 Lynne Parker, executive director of the Massachusetts Legal Assistance Corporation, speaks at Walk to the Hill

Jonathan Albano, president of the Boston Bar Association (BBA), stressed both the proven economic benefits of investing in legal aid and the current inability to meet the state’s full need. He cited a BBA report which showed that civil legal aid “produces a positive return on investment—in housing cases, in taking on intimate-partner violence, and in securing rightful federal benefits, to name just a few vital areas.” He also stressed that “roughly 45,000 eligible Massachusetts residents are turned away each year. Plus, given recent developments at the federal level, including changes to immigration policies and cuts to antipoverty programs, the need for state legal aid will likely continue to grow.”

President of the Massachusetts Bar Association Christopher Kenney argued that the shortfall in legal aid funding amounts to a crisis: “More than 66 percent of eligible people in Massachusetts are forced to face life-changing legal matters alone, making it less likely they’ll succeed and more likely that they’ll require other state resources and add to the state’s fiscal burden.”